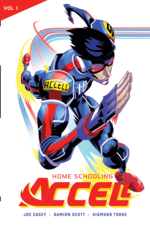 $14.99
Daniel DosSantos is a young man living at the speed of life, with his job, girlfriend, and video games. After gaining powers from exposure to an extraterrestrial object, DosSantos becomes the rapid-action superhero called Accell, the first of a new public kind of crime fighter and bad guy smasher. Unfortunately, there are consequences to moving faster than sound. Every time Accell uses his super speed powers, the results of super speed activity on his body come back in the form of massive muscle-tearing and bone-shattering internal damage . . . and that's the least of his worries.The father of Accell's girlfriend wants him dead and is sending one mercenary after another to kill the young speedster.In the aftermath of a battle, Accell tries to test the limits of his power and finds out the true nature of traveling at super speed, and the other dimension beyond and parallel to our own.The return from that harrowing experience makes Accell reevaluate everything. The way he's living without responsibility, without serious thought, without knowing his purpose.Daniel is starting to run on the road of maturation, as pushing his own limits forces him to consider things greater than himself.Danger exists on the flip side of having superpowers, and sometimes you have to grow up quickly to survive.
→ more 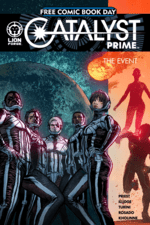 Free
The origin of the Catalyst Prime superhero universe is revealed, as five astronauts take on a suicide mission to save the Earth from an asteroid collision, leading to the rise of superpowered beings.
→ more 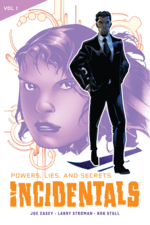 $14.99
Bo Vincent Chen is a billionaire who gained superpowers on the night of "The Event," and he's been plagued by nightmares ever since. His covert team of superhuman operatives is fighting against enemies from all sides to save the superpowered teenager called Seven, but time is running out, and internal conflicts may rip the group apart before they complete the mission. The bigger problem is the secret Bo is keeping from his team, about the real danger heading to Earth.
→ more 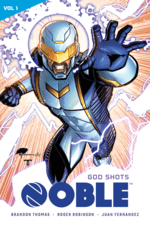 $14.99
Astronaut David Powell helped save the Earth from an approaching asteroid. In the resulting explosion, David gained superhuman telekinetic powers but lost his memories. Now back on Earth, David is on the run from the Foresight Corporation and its CEO, Lorena Payan, using his new powers to stay alive long enough to regain his memories, family, and identity. To put her family back together, Astrid Allen-Powell will use every skill and weapon in her arsenal to get back the man she loves. The first series of the Catalyst Prime superhero universe is collected, with art by series regular Roger Robinson and Jamal Igle (Supergirl, Black).
→ more 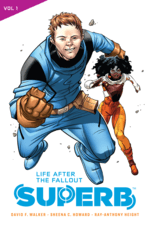 $14.99
After the Earth survived annihilation from an asteroid which was destroyed by a group of heroic astronauts, the resultant meteor shower turned Youngstown, Ohio, into a Level 5 impact zone. After a Columbine-like incident in which a superpowered teenager exploded and killed other youngsters, the Foresight Corporation took over Youngstown to find and regulate any other teenagers with emerging powers. Kayla Tate has returned to Youngstown because her parents are scientists for Foresight. Kayla has reunited with her childhood friend, Jonah Watkins, a young man with Down syndrome. Kayla and Jonah are learning about each other again, as a mysterious new superhuman named Cosmosis has become the Internet sensation as the hero of Youngstown. Kayla discovers that Cosmosis . . . is Jonah! Based on his favorite comic book hero, Jonah is using the secret powers he gained from the meteor shower to help people and fight bad guys. To protect Jonah, and discover the sinister mysteries of her town, Kayla uses her own powers gained from a meteor fragment to fight alongside Jonah as the hero Amina. When Amina and Cosmosis discover that young superpowered people are being kidnapped and trained to become Earth's best line of defense against the possibility of an alien invasion, the two teenage heroes use their abilities to stop Foresight, all the while helping each other navigate through resentment, naivete, and the awkward steps of rekindling their friendship.
→ more
1 - 5 of 5 results